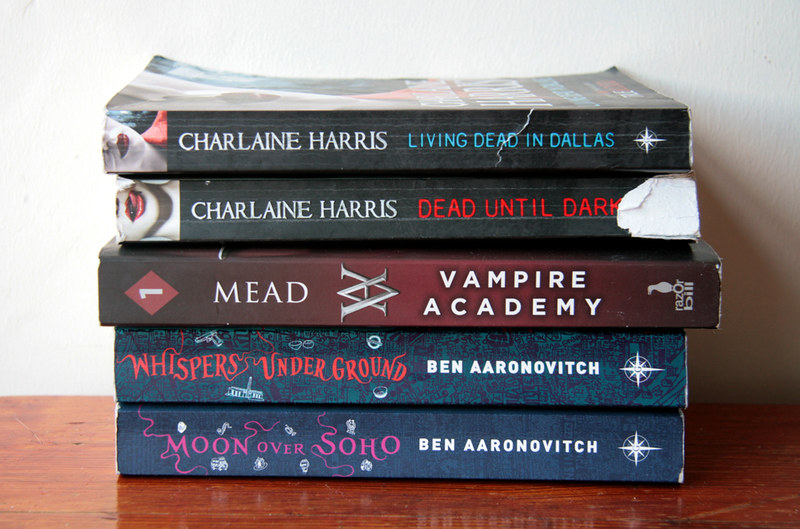 February and March bled together this year, I was lying on a beach during the time when one turned into the other so this months bookpile is a double pile of the utter nonsense I devoured whilst I was dozing on said beach losing track of time.

Vampire Academy is surprisingly excellent, if you like teenagers and vampires and potentially attractive Russian cowboys (?!) you will enjoy this book immensely. I guess its kind of similar to Buffy? I'm pretty excited for the film coming out in April (and Divergent, what a month for YA movies omg).

I finally caught up with the rest of London and read the rest of Aaronovitch's Peter Grant series, which is superb and gets better with each book. I like that the only way to describe these books is "Harry Potter but in the Police and grown up" then there is a substantial amount of hilarious Harry Potter references scattered throughout. Oh the hilarity.

Do not ask me what convinced me to start reading the tripe that is the Sookie Stackhouse novels but I picked them up in an op shop for $3 each and couldn't put the first one down despite making noises like 'huh' and 'pfft' during the course of the 3 days it took me to finish it. I had already tried reading it once before - prior to the YABC times, Lipsy and I would print out a chapter of the first book, read it and add our comments (examples like "how did this get published!" and "I think I wrote a story like this when I was 14") in RED then post it on. Hilarity ensued - but it only lasted about 3 chapters. I guess being half asleep helped me to enjoy it this time around and I've gotten as far as the second book. I gave up on True Blood after Season 3. I now own 4 of the books and I guess I'll save them for days when I need a laugh - although, Eric Northman where have you been all of my life.

I vow to read some proper grown up books in April.

Follow me on GoodReads, or check out past bookpiles.
Posted by dianne tanner dot co dot uk at Tuesday, April 01, 2014
Email ThisBlogThis!Share to TwitterShare to FacebookShare to Pinterest
Labels: Books and Films

Welcome to the photography / life blog of Dianne Tanner. I'm a freelance photographer who likes to collect moments in quiet museums and empty graveyards with a very old camera. I'm available to shoot your events or products for online merchandising - you can get in touch via my website or social media using the links below.

Would you prefer to get new posts via email? Add your address here and this will occur ~ like magic